Open Shortest Path First (OSPF) is a routing protocol for Internet Protocol (IP) networks. It uses a link state routing (LSR) algorithm and belongs to the group of interior gateway protocols (IGPs). It is operating in a single autonomous system (AS). OSPF supports the Classless Inter-Domain Routing (CIDR) addressing model.

OSPF is a widely used IGP in large enterprise networks. 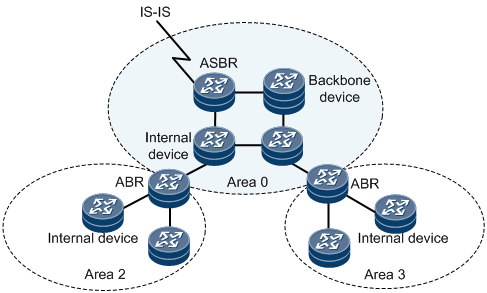 An OSPF network can has areas that are logical groupings of hosts and networks. An area includes its connecting router having interfaces connected to the network. Each area maintains a separate link state database whose information may be summarized towards the rest of the network by the connecting router. Thus, the topology of an area is unknown outside the area. This reduces the routing traffic between parts of an autonomous system (AS).

The backbone area (also known as area 0 or area 0.0.0.0) is the core of an OSPF network. All other areas are connected to it, either directly or through other routers. Inter-area routing happens via routers connected to the backbone area and to their own associated areas. It is the logical and physical structure for the ‘OSPF domain’ and is attached to all nonzero areas in the OSPF domain. Note that in OSPF the term Autonomous System Boundary Router (ASBR) is historic, in the sense that many OSPF domains can coexist in the same Internet-visible autonomous system.

The backbone area is responsible for distributing routing information between nonbackbone areas. The backbone must be contiguous, but it does not need to be physically contiguous; backbone connectivity can be established and maintained through the configuration of virtual links.

Modifications to the basic concept of stub areas exist in the not-so-stubby area (NSSA). In addition, several other proprietary variations have been implemented by systems vendors, such as the totally stubby area (TSA) and the NSSA totally stubby area, both an extension in Cisco Systems routing equipment.

A not-so-stubby area (NSSA) is a type of stub area that can import autonomous system external routes and send them to other areas, but still cannot receive AS-external routes from other areas. NSSA is an extension of the stub area feature that allows the injection of external routes in a limited fashion into the stub area. A case study simulates an NSSA getting around the Stub Area problem of not being able to import external addresses. It visualizes the following activities: the ASBR imports external addresses with a type 7 LSA, the ABR converts a type 7 LSA to type 5 and floods it to other areas, the ABR acts as an “ASBR” for other areas. The ASBRs do not take type 5 LSAs and then convert to type 7 LSAs for the area.

Totally stubby area
A totally stubby area is similar to a stub area. However, this area does not allow summary routes in addition to not having external routes, that is, inter-area (IA) routes are not summarized into totally stubby areas. The only way for traffic to get routed outside the area is a default route which is the only Type-3 LSA advertised into the area. When there is only one route out of the area, fewer routing decisions have to be made by the route processor, which lowers system resource utilization.

Occasionally, it is said that a TSA can have only one ABR.

NSSA totally stubby area
An addition to the standard functionality of an NSSA, the totally stubby NSSA is an NSSA that takes on the attributes of a TSA, meaning that type 3 and 4 summary routes are not flooded into this type of area. It is also possible to declare an area both totally stubby and not-so-stubby, which means that the area will receive only the default route from area 0.0.0.0, but can also contain an autonomous system boundary router (ASBR) that accepts external routing information and injects it into the local area, and from the local area into area 0.0.0.0.

Redistribution into an NSSA area creates a special type of LSA known as type 7, which can exist only in an NSSA area. An NSSA ASBR generates this LSA, and an NSSA ABR router translates it into type 5 LSA which gets propagated into the OSPF domain.

A transit area is an area with two or more OSPF border routers and is used to pass network traffic from one adjacent area to another. The transit area does not originate this traffic and is not the destination of such traffic.