The Routing Information Protocol (RIP) is one of the oldest distance-vector routing protocols. It employs the hop count as a routing metric. RIP prevents routing loops by having a limit on the number of hops allowed in a path from source to destination. The largest number of hops allowed for RIP is 15, which limits dramatically the size of networks that RIP can support.

In RIPv1 routers broadcast updates with their routing table every 30 seconds. In the early deployments, routing tables were small enough that the traffic was not significant. As networks grew in size, however, it became evident there could be a massive traffic burst every 30 seconds, even if the routers had been initialized at random times.

Nowadays, RIP is not the preferred choice for routing as its time to converge and scalability are very poor compared to EIGRP, OSPF, or IS-IS. However, it is easy to configure and implement, because RIP does not require any parameters unlike other protocols.

RIP uses the User Datagram Protocol (UDP) as its transport protocol, and is assigned the reserved port number 520. 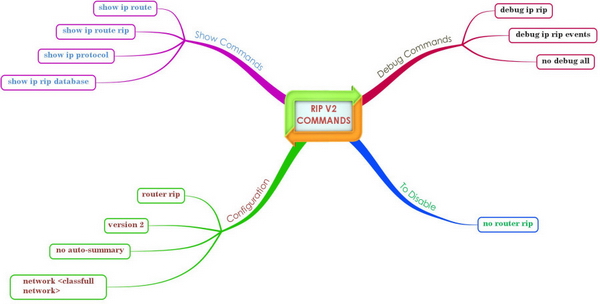 Based on the Bellman–Ford algorithm and the Ford–Fulkerson algorithm distant-vector routing protocols started to be implemented from 1969 onwards in data networks such as the ARPANET and CYCLADES.

The routing metric used by RIP counts the number of routers that need to be passed to reach a destination IP network. The hop count 0 denotes a network that is directly connected to the router. 16 hops denote a network that is unreachable, according to the RIP hop limit.

There are three versions of the RIP: RIPv1 and RIPv2 for IPv4, and RIPng for IPv6.

The original specification of RIP, was published in 1988. When starting up, and every 30 seconds thereafter, a router with RIPv1 implementation broadcasts to 255.255.255.255 a request message through every RIPv1 enabled interface. Neighbouring routers receiving the request message respond with a RIPv1 segment, containing their routing table. The requesting router updates its own routing table, with the reachable IP network address, hop count and next hop, that is the router interface IP address from which the RIPv1 response was sent. As the requesting router receives updates from different neighbouring routers it will only update the reachable networks in its routing table, if it receives information about a reachable network it has not yet in its routing table or information that a network it has in its routing table is reachable with a lower hop count. Therefore a RIPv1 router will in most cases only have one entry for a reachable network, the one with the lowest hop count. If a router receives information from two different neighbouring router that the same network is reachable with the same hop count but via two different routes, the network will be entered into the routing table two times with different next hop routers. The RIPv1 enabled router will then perform what is known as equal-cost load balancing for IP packets.

RIPv1 enabled routers not only request the routing tables of other routers every 30 seconds, they also listen to incoming requests from neighbouring routers and send their own routing table in turn. RIPv1 routing tables are therefore updated every 25 to 35 seconds. The RIPv1 protocol adds a small random time variable to the update time, to avoid routing tables synchronising across a LAN. It was thought, as a result of random initialization, the routing updates would spread out in time, but this was not true in practice.

RIPv1 can be configured into silent mode, so that a router requests and processes neighbouring routing tables, and keeps its routing table and hop count for reachable networks up to date, but does not needlessly sends its own routing table into the network. Silent mode is commonly implemented to hosts.

RIPv1 uses classful routing. The periodic routing updates do not carry subnet information, lacking support for variable length subnet masks (VLSM). This limitation makes it impossible to have different-sized subnets inside of the same network class. In other words, all subnets in a network class must have the same size. There is also no support for router authentication, making RIP vulnerable to various attacks.

Due to the deficiencies of the original RIP specification, RIP version 2 (RIPv2) was developed in 1993 and last standardized in 1998. It included the ability to carry subnet information, thus supporting Classless Inter-Domain Routing (CIDR). To maintain backward compatibility, the hop count limit of 15 remained. RIPv2 has facilities to fully interoperate with the earlier specification if all Must Be Zero protocol fields in the RIPv1 messages are properly specified. In addition, a compatibility switch feature allows fine-grained interoperability adjustments.

In an effort to avoid unnecessary load on hosts that do not participate in routing, RIPv2 multicasts the entire routing table to all adjacent routers at the address 224.0.0.9, as opposed to RIPv1 which uses broadcast. Unicast addressing is still allowed for special applications.

(MD5) authentication for RIP was introduced in 1997.

RIPng (RIP next generation) is an extension of RIPv2 for support of IPv6, the next generation Internet Protocol. The main differences between RIPv2 and RIPng are:

The routing information protocol uses the following timers as part of its operation:

Cisco’s proprietary Interior Gateway Routing Protocol (IGRP) was a somewhat more capable protocol than RIP. It belongs to the same basic family of distance-vector routing protocols. Cisco has ceased support and distribution of IGRP in their router software. It was replaced by the Enhanced Interior Gateway Routing Protocol (EIGRP) which is a completely new design. While EIGRP still uses a distance-vector model, it relates to IGRP only in using the same routing metrics. IGRP supports multiple metrics for each route, including bandwidth, delay, load, MTU, and reliability.